Solar panels provide meaningful power at home, on the road and anywhere you need it. A complete solar solution includes the panel, a storage device which is usually a battery, and a charge controller to manage the relationship between the panel and the battery. What is often misunderstood or completely neglected is the vital role charge controllers play in the overall solar solution. Choosing the incorrect controller could mean reduced battery life, higher cost or lower efficiency.

We will key in on each technology’s advantages, disadvantages and reasons why you would want to use each in a specific environment or use case.

Before diving into charge controllers it is important to understand that a solar panel in the dark will perform like a diode connected across a battery.

For example, if a battery has an 80Ah capacity then 80/100 = 0.8. This means that the battery can be safely charged using a solar panel that will put in no more than 0.8A at the float voltage of the battery, approximately 13.8V. This is the lowest cost charging solution but it does not allow a battery to be charged quickly since only a low power panel can be safely used.

Additionally, this method is low efficiency since the panel will be held at battery voltage and not at its maximum power point. This method works well for systems where battery load is low and the primary goal is maintaining a charged battery during long periods of idle time like in motor pools.

The second type of charging system uses a zener diode as the output voltage regulation device to keep the voltage from exceeding a maximum level. One example of a circuit like this is shown in Figure 1. Notice in this system D1 is incorporated as a blocking diode.

The circuit branch with R2 and the green LED is for indication purposes only. This is only necessary if an indicator is required that shows the solar panel is producing some power.

This type of indicator will turn on even when there is not enough power produced by a solar panel to adequately charge a device. In some cases, a device may indicate charging due to the presence of a charge voltage even though the device is still discharging due to device consumption rates being higher than solar generation rates.

Also, the addition of indicator circuitry like an LED can reduce your overall charge rate. When charging high power devices like phones the power consumed by the LED is small compared to device power, but if the same indicator was put on a low power IoT device the LED could consume more power than the device itself.

During operation when the solar panel is illuminated it will produce a voltage based on the type of panel it is and a current based on the light level. When the output is lower than 4.7V, some of the current produced is consumed by the zener diode, which then biases the transistor and allows current to flow into the battery.

As the output voltage rises the transistor’s effective resistance will start to increase until the transistor shuts off and battery charging is terminated.

This diode circuit is an inexpensive option for charging but does not have the efficiency or built-in battery protections of other systems. Extreme care must be taken when using a circuit like this since if one of the circuit elements is incorrect it could overcharge the battery and damage it or cause a fire.  Also, if it is connected to the battery in reverse it may damage the battery.

Low Drop Out Regulators (LDOs) can be used for charge controllers on many types of batteries. They work by setting a maximum charge voltage.

These systems are relatively low cost and can be designed to limit the charge current into the battery. Efficiency is low when the voltage of the solar panel is much higher than battery voltage because the LDO is effectively a variable resistor, so the input impedance is not set to draw power from the solar at the maximum power point.

LDOs charge most efficiently when the solar panel is designed with a power point voltage that is close to the charging voltage range of the battery. They are also primarily used on low power systems to keep the heat dissipation through the LDO at a manageable level.

Figure 2 shows a TI reference design from the LM1084 LDO datasheet. Using the equation for IF allows the charge current of the system to be calculated and limits set. This system only works for LDOs that are variable voltage output.

Fixed LDOs can also be used to charge a battery but without the ability to control the charge current rate. 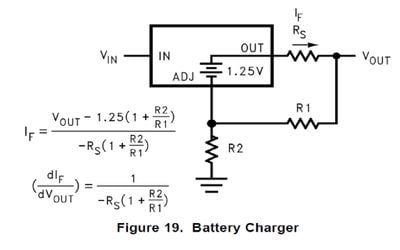 DC-DC converters, Buck or Boost, can be used as a battery charger. These systems are more expensive than the previous three options, but offer greater efficiency and an increased feature set. They can be built using either buck or boost reference designs with the addition of power point tracking circuitry or one of the many off the shelf ICs that have power point tracking circuitry built in.

DC-DC converters are useful for battery charging across a range of power from microwatts to kilowatts. They come in many different levels of complexity, but the most important thing required for them to be compatible with a solar panel is the ability to maintain the input voltage of the panel near its power point.

Power point tracking is important to maintain the functionality of the charger in all lighting scenarios. For example in the case of a buck converter if the load draws more current than the panel is actively producing the high side MOSFET will turn on and stay on and the panel will be pulled down to the battery’s voltage. This will result in a significant loss in potential power if the battery’s voltage is far from the panel’s maximum power point.

For a boost converter if there is not enough power available from the panel the converter will draw enough current to reduce the voltage below the "on" threshold of the converter and not allow the system to operate. By adding a power point tracking system these problems can be overcome.

A true maximum power point tracking system typically has a microcontroller, which implements an algorithm such as “perturb and observe” to identify and maintain the input impedance of the system at the maximum power point for a panel. It works by periodically sweeping the input impedance of the converter and measuring the corresponding change in power.

At the end of the sweep, the input impedance of the system is set at the point of maximum power collection until the next sweep is performed. These systems are able to draw the optimum amount of power from a panel in any lighting condition including partial shading. Figure 3 compares the three tracking systems implemented on a solar panel for an indoor IoT application.

This type of system works relatively well and is less expensive to implement than a true maximum power point tracking system. It works well because as light intensity changes or if an individual cell is damaged or shaded the remainder of the cells will produce a similar ratio as the entire array. The ratio percentage is specific to the solar technology. For example, the ratio for amorphous silicon would be around 0.7, while the ratio for monocrystalline silicon would be 0.8.

PowerBoost charge controllers used on PowerFilm’s Soltronix line of products are Fixed PowerPoint DC-DC converters. These systems are designed and optimized to provide the most power from the Soltronix panels they are integrated into at the lowest possible cost providing our customers with the best performance and value.

The last type of charge controller is the PWM charger. This system connects and disconnects the panel to and from the battery in short bursts and monitors the voltage of the battery to determine the state of charge. The PWM charger will only work with panels that have a higher voltage than the battery they are charging.

These systems are much less efficient than the DC-DC converter systems because each time the system pulses and connects the battery to the panel the voltage of the panel is set at the battery voltage. Figure 4 shows the percent of maximum power point a solar panel is operating at for three different controllers including PWM.

The PWM controller is only able to put 60 to 80% of the peak panel power into the battery. This means that if you have a panel with an 18V power point, like many of the c-Si panels available on the market, the PWM controller will set the panel voltage at 10.5 to 14.5V depending on the battery charge level. These voltages are a long way from the powerpoint of the panel, so the power put into the battery from the panel will be much lower than the rated output power of the panel. DC-DC converters and PWM controllers of similar power levels and feature sets can be comparable in price. 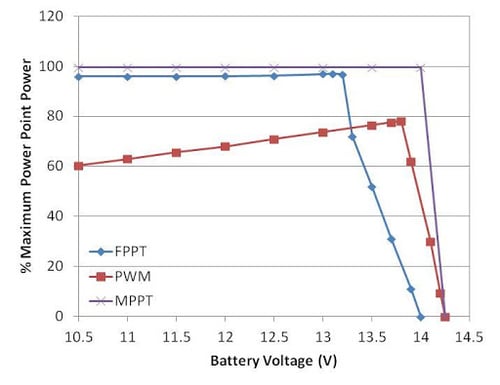 There are a number of different options for battery charging using solar. Table 1 provides a rough comparison of the charging methods. As with all battery charging it is important for the designer to understand the charging algorithm and requirements for the battery chemistry they plan to use and implement a charging system that is compatible and safe for that battery.

When selecting a solar charge controller method take care in thoroughly dissecting your use case to ensure that your selected technology will perform for you without potential issues.

Do you need help selecting the right technology for you?

Do you need a solar partner that can not only provide the panel but an integrated charging solution that maintains high performance for a fraction of the price?

We would love to speak with you and discuss why PowerFilm is the ideal solar partner and how we can help bring your next solar product to market.